Always Have A Plan Bee

There’s a new full-color graphic novel out that’s both informative and timely. The Way of the Hive by Jay Hosler is actually an updated re-do of their book called Clan Apis. The new one goes like this: “The life cycle of the honey bee is given a whole new twist in this graphic novel that follows the life of a Nyuki (Swahili for bee) from her early days as a pupa until her death at the base of a flower. She is mentored by her older sister Dvorah, who tries to hold back Nyuki’s early urges to explore. A premature sojourn from the hive results in some close calls with a praying mantis and a spider, and Nyuki returns home vowing to never leave again. Now Dvorah has to find a way to lure her out, and her success is bittersweet. As Nyuki grows older, she becomes a beloved member of the hive and ends up in the role of mentor herself, helping out a younger bee named Melissa.” Jay Hosler is a biology professor, so they know their stuff! Kids Book A Day has a review with some preview pages as well. The book is available in hardcover and softcover editions from Harper Alley. 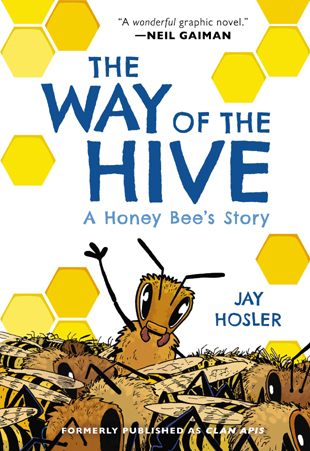