At The Dragon Strip?

Faces familiar and new come your way in the latest work from Joey Weiser. “On your mark, get set, GO! Dive into the graphic novel sequel to Ghost Hog [we talked about it before!] from the Eisner Award-nominated creator of Mermin [that too!] full of action, adventure, and speed! Following the events of Ghost Hog, Truff, Claude, and Stanley are joined by a new friend, Vern, as he gears up for the big race back home in Dragon Racer! He’s never won the race before…but this could be his year! Vern’s been practicing and practicing, both on and off the road. But when the other racers start to tease the fast driving dragon about his abilities on the track, he’ll have to put the pedal to the metal and prove he’s got the speed and finesse to compete in this year’s race… Zoom into this fast-paced graphic novel full of friendship, teamwork, and believing in yourself.” Dragon Racer is available now in trade paperback from Oni Press. 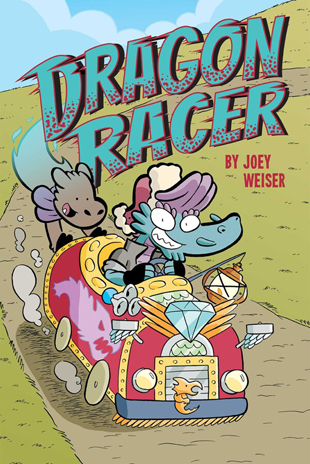