Cats That You Can’t See — At Least Yet

For those of us of previous generations, this might be a bit hard to follow. But we’ll let Animation World Network explain it: “What’s the kitty been smoking? Fan favorite actress Mila Kunis (That 70’s Show, Family Guy, Bad Moms) has released the new animated series Stoner Cats, by far the highlight of this past month. Kunis teamed with Chris Cartagena (The Grinch), Sarah Cole (Spider-Man: Into the Spider-Verse), and Ash Brannon (Toy Story 2) under the Orchard Farm Productions banner to create the show, which features (surprise, surprise) a bunch of weed smokin’ felines.” Here’s the fur-rub though: “Interestingly, the first episode of the series was released as 10,420 NFTs on July 28th, which sold out within 30 minutes. Each episode was sold for .35 ETH, or approximately $8 million in cold hard American dollars. While NFTs are still new, strange, and misunderstood by many, there is a huge market for those wanting to own a piece of entertainment history.” Got all that? Here’s hoping they eventually release the series through other avenues as well. 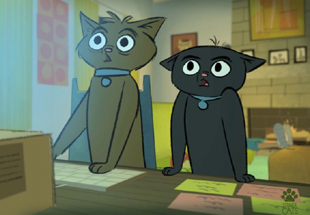