The Horse of a New Generation

So, My Little Pony fandom (and the Internet in general!) have been exploding now that Netflix has released the first full trailer for the upcoming My Little Pony: A New Generation. This is Generation 5, if you’re keeping count, and unlike previous generation shifts, this one actually connects to the previous one — as the storyline of Generation 4 (My Little Pony: Friendship Is Magic) takes place in this story’s past history. This is also the first generation of official pony that will be completely animated in CGI. Here’s what we learned from Wikipedia: “My Little Pony: A New Generation is an upcoming computer-animated fantasy comedy film directed by Robert Cullen and Jose Ucha… The film will center on Sunny Starscout, an outcast and young earth pony who sees hope in Equestria where friendship and harmony have been replaced with paranoia and mistrust, and where all three species of ponies live segregated from one another. However, when she meets a lost unicorn named Izzy, the two embark on an adventure involving musical numbers, a jewel heist, conspiracy theories, and ‘the world’s cutest flying Pomeranian’ as they travel to new lands while facing their fears and turning enemies into friends.” There’s a series planned to follow the feature film, but we don’t know much about it yet. What we DO know is that A New Generation is scheduled to drop on Netflix on September 24th. 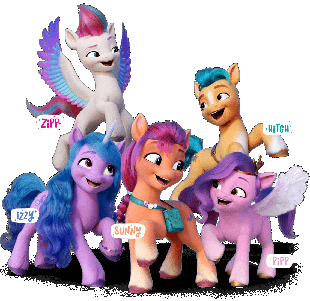