Rainbow Bridge is a new graphic novel written by Steve Orlando and Steve Foxe, with art by Valentina Brancati. The story goes like this: “Rainbow Bridge is about a 14-year-old boy, Andy, whose lifelong canine best friend passes away right before Andy is about to start high school. Andy has relied on Rocket for support ever since he was a toddler and Rocket was a pup, and now he’s not so sure about handling such big life events without Rocket in his life. When Andy gets overwhelmed and runs off to a spot that was important to the two of them, a dizzyingly colorful splash of light swoops down and carries Andy away to the Forever Fields, the afterlife paradise for animal companions. It turns out the Rainbow Bridge that pet lovers always talk about when an animal passes away is real, but humans are NOT supposed to cross it—especially humans who are still alive. If the Rainbow Bridge allowed Andy across, it must mean there is powerful unfinished business between him and Rocket. And as Andy soon discovers, animals who linger with unfinished business run the risk of turning into wraiths, vengeful, shadowy spirits that haunt the outskirts of the Forever Fields, driven by unresolved pain and trauma.  Rocket has always been there for Andy. Now it’s Andy’s turn to find his best friend and make sure Rocket gets the afterlife he deserves.” It’s available now from Aftershock, and Big Comic Page has a preview. 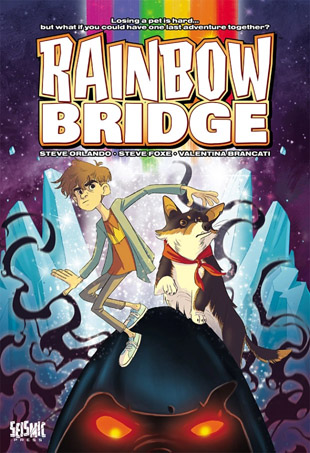