Mom is a Monkey. Kind of.

Thanks to ASIFA Hollywood we found out about Ape Star, a new Scandinavian animated film directed by Linda Hambäck. Based on a popular children’s book by Frida Nilsson, the set-up is pretty simple: “Joanna is a feisty young orphan who wants to be adopted more than anything else. When her potential new mom drives up to the orphanage, she gets a big shock as the door opens and a talking gorilla steps out.” An English dub is making its way into streaming services now. Take a look at the trailer on YouTube. 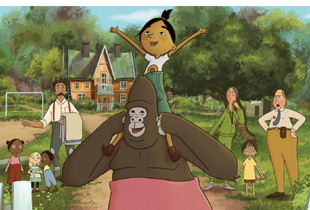