Rodent on the Range

And here we go again… Yet another interesting-sounding anthropomorphic animated project that sounds like it’s being distributed all over the world — but not here in North America. At very least not yet. From Animation World Network: “French animation production and distribution company Dandelooo has secured several deals for Billy the Cowboy Hamster, a preschool 2D animated series commissioned by France Televisions… Directed by the Swiss illustrator Antoine Rota (Kaeeloo) and Caz Murrell, Billy the Cowboy Hamster targets 4- to 7-year-olds. The series, based on the popular book series by Dutch author and illustrator Catharina Valckx, has sold over one million books in France and is popular in many other countries. The show follows three friends, Billy, Jean-Claude the worm, and Suzie the stone marten as they embark on thrill-seeking adventures… In the series, Billy wants to become a cowboy, but he is only a little boy… well a little hamster really! Growing up in the Wild West and raised on the exciting stories told by his father, he has a burning desire to hit the trail! Donning his cowboy outfit, Billy sees every day as a chance to go on an adventure worthy of the greatest cowboys.” The series is in production now. Here’s hoping we get so see it out our way sometime! 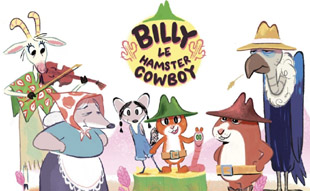