Once again it’s modern takes on classic fairy tales with the new Far Out Fables series of short graphic novels from Capstone. Take Little Red Hen, Video Star (written by Steve Foxe and illustrated by Otis Frampton) for instance. “Animals in Barnyard Meadows are glued to their phones. But Little Red Hen doesn’t just want to watch internet videos. She wants to make them too! Unfortunately, her friends aren’t eager to put in the hard work of creating an online baking show. When each step of the process reveals the wild side of their quiet town, will Red’s friends realize all the fun they’re missing, and can the hen become a video star?” Other titles in the series include The Three Little Flying Pigs, Puss In Magical Motocross Boots, and The Grasshopper and the Ant at the End of the World. Whew! All of them are available now in trade paperback. 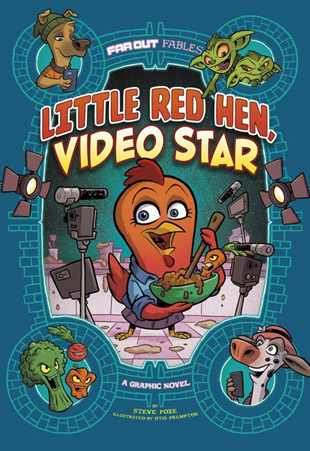