TV for the Young and Young At Heart

Cartoon Brew just announced that Neflix has given the green-light to four new animated TV series for young viewers… and the cool thing is, three of them are quite furry! Check out The Creature Cases, created by Gabe Pulliam. “An animated action-comedy series which follows the adventures of Sam Snow and Kit Casey, agents of CLADE: the Covert League of Animal Detective Experts. In a world populated exclusively by animals, these brilliant sleuths travel the globe solving mind-boggling mysteries that mix real zoological facts with wild detective action!” Then there’s Big Tree City: “Hot-sauce volcanoes, biscuit dinosaur mysteries, and exploding soda pop factories; join the wild rescues of Major Prickles and his overzealous team, as they try to save the animal citizens of Big Tree City.” And finally there’s Deepa and Anoop, “An all-new animated preschool series from Mattel Television that follows the adventures of fun-loving seven-year-old Deepa and her best friend Anoop, a color-changing elephant, at Deepa’s family’s bed and breakfast Mango Manor.” All heading our way in 2022. 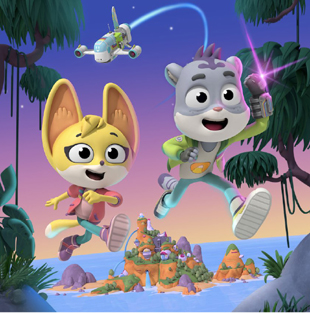