Watch Out for the Weasel

American Mythology has a new horror mini-series comic, and it’s out now just in time for the Halloween Season. Willy’s Wonderland was a surprise hit horror movie from earlier this year. Though at first dismissed as an obvious Five Nights At Freddy’s cash-in (duh!), it turned out people really liked the film, mostly for the over-the-top performance of star Nicolas Cage. So the folks at American Mythology wondered: What happened before the movie? “Hey Kids!  Do you know what time it is? It’s your birthday and we want you to have Fun! Welcome to Willy’s Wonderland! Nicolas Cage unleashes a can of Punch Pop on the Willy’s serial killing animatronic crew in the film, but what came before the janitorial rampage?  Find out here in this official prequel to the movie giving you all the party filled blood spatter you can handle! Willy, Ozzie, Arty, Cammy, Tito, Gus, Sara, and Knighty Knight all are back with a blood soaked romp through homicidal birthday parties!” This special series is written by SA Check (Volcanosaurus) and James Kuhoric (Freddy vs Jason vs Ash) with interior art by Puis Calzada (Hatchet).” Looks like there’s a lot of seasoned horror talent behind this thing. 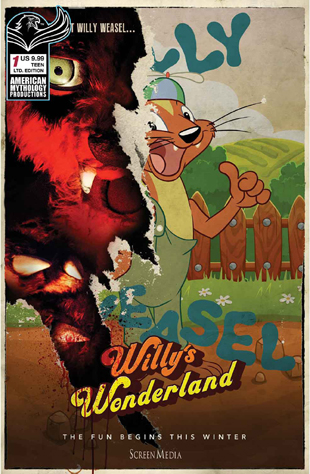