Defender of the City. Heaven Help Us All.

We’ve heard a lot lately from comic writer Steve Foxe. Well now he’s back again with a new full-color graphic novel, illustrated by Shadia Amin. “Experience a laugh-out-loud day in the life of Spider-Ham! After long being derided by the citizens of New York, Spider-Ham has finally been recognized for his outsized contribution to the city’s safety, and receives the key to the city from none other than the mayor (and, being a cartoon universe, the key actually unlocks New York City’s political and financial institutions). Sure, it’s just a publicity stunt for the beleaguered mayor-and yeah, maybe every single other super hero was busy that day — but an award is an award!” Spider Ham: Great Power, No Responsibility is available now in trade paperback or hardcover from Scholastic. There’s an interesting video up on YouTube as well. 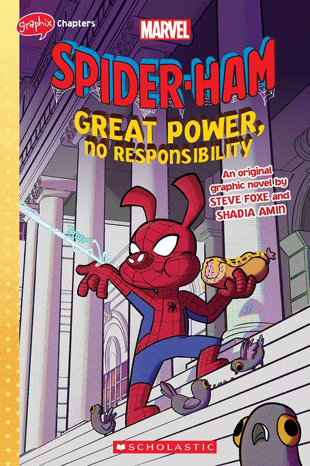