Easter In One Body

[Back from Biggest Little Fur Con, and ready to roll!] We literally stumbled across a new furry film coming out in Europe next year. As usual with many such projects, we have no idea if it will ever see the light of day in North America, but we can hope. It’s called Chickenhare and the Hamster of Darkness (whew!) and it’s based on the Chickenhare series of graphic novels by Chris Grine. “The series follows the story of Chickenhare, a rare and exotic cross between a chicken and a rabbit, and his bearded box turtle friend, Abe,” says Wikipedia. The movie, meanwhile, goes like this: “Set in a lush fantasy world, the film follows the adventures of Chickenhare, a young hero born half chicken and half hare, who was adopted by King Peter, a famous hare adventurer. Eager to fit in and feel loved in spite of his differences, Chickenhare is obsessed with adventuring – no matter how clumsy he is. When the Kingdom’s greatest villain – his own uncle – escapes from jail and threatens to overthrow his father, Chickenhare embarks on an epic race against time along with Abe, a sarcastic turtle, and Meg, a reckless female martial arts expert, to stop him.” Turns out the film has been in development for quite a while now, before finally being brought to the screen next year by directors Ben Stassen and Benjamin Mousquet. The Internet Movie Database has the official trailer and more information. 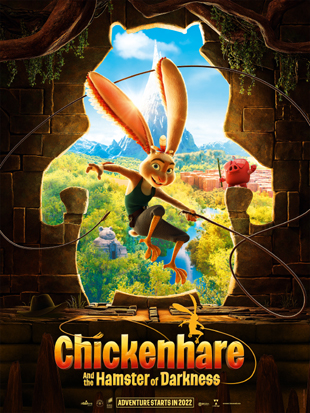