So, What’s Up On YOUR Island?

You might have caught wind of the fact that the game Animal Crossing: New Horizons has become rather popular with Furry Fandom — and with game fans in general. Yes? Well given all that, it’s inevitable that soon there would be a manga to go along with it — and now here it is! Animal Crossing: New Horizons Volume 1 — Deserted Island Diary is a new black & white manga by Kokonasu Rumba. Here’s a review from Women Write About Comics: “Tom Nook and other fan favorites are introduced through the medium of manga, bringing the same charm and quirks you know and love from the video game. Venture out on hilarious antics and adventures with an abundance of fan-favorite villagers and new human villagers. Sit by the camp fire with Gulliver, help Blathers expand the museum, try on countless outfits with the Able Sisters, or have a night party with Wisp!” It’s all available now from Viz Media. 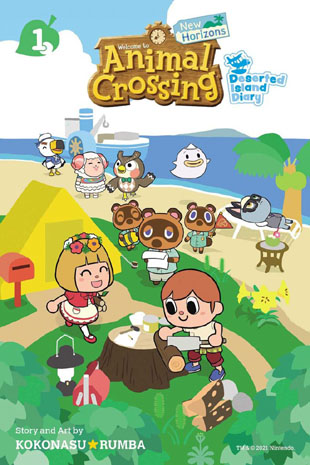