They May Have A Hit On Their Hands

Sorry, Hulu… Long, long ago we told you all about Marvel’s very strange comic series Hit Monkey. We had heard on the wind (aka the Internet) that there was an animated adaptation in the works. And now, here it is! November 17th, Hulu premiered the first episodes. Here’s more from Animation World Network: “Based on the 2010 Marvel comic by writer Daniel Way and artist Dalibor Talajić, the all-new Hulu Original, Marvel’s Hit-Monkey, follows a badass monkey ‘with a mission.’ When the Japanese snow monkey’s tribe is slaughtered, he joins forces with the ghost of an American assassin and together, they begin killing their way through the Yakuza underworld. The 2D animated series is created and executive produced by Josh Gordon and Will Speck, with Joe Quesada also serving as executive producer. The voice cast includes George Takei, Jason Sudeikis, Olivia Munn, Ally Maki, Nobi Nakanishi, and Fred Tatasciore.” Of course there’s a trailer up on YouTube as well. Revenge is a beast. 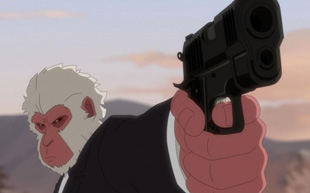