The House of the Big Blue Bear

Hitting up the Los Angeles Comic Con recently, we stumbled across the Boffo the Bear Show — created by Mark DeCarlo, starring himself as the motion-capture blue ursine. We’ll let show producer Joe Kozdra describe it: “Boffo the Bear is a household name in the 21st Century after having a huge career in show business spanning a number of decades no one really knows for sure since he’s been in everything you can think of, knows anyone you can name, and knows the answer to everything …er, at least he thinks he does. After a life time being on camera, behind a microphone and signing autographs, Boffo has decided to settle down by taking complete control and starting his own talk show with celebrity interviews, game shows, and special segments that gives everyone something to enjoy”. Fun fact: Well-known voice actor Rob Paulsen is a frequent guest. Take a look at the blue bear’s YouTube channel. 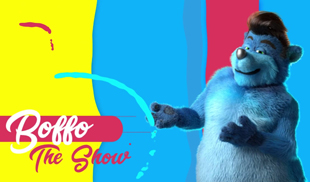