Judge Me By My Size, Do You?

Scout Comics have imported another interesting full-color comic from Europe: Sengi and Tembo, written and illustrated by Giuseppe Falco. “The African savannah, a windswept expanse of tall grass, a few all-too-rare trees, overwhelming heat… and more than a few hungry predators… Sengi, the little mouse, finds himself alone after the death of his mother and must learn to survive. Tembo, the old elephant, feels that his life is coming to an end. So he decides to leave his herd to try to reach the “Land without beginning,” a mythical place accessible by a secret passage to the west. For a few days, these two disparate lives, that of the pragmatic mouse and the even-tempered elephant, will collide and join paths. Their futures will be changed forever.” Scout has the collected story available in both paper and digital versions… and on VHS?? 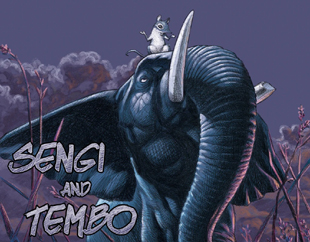