Finally To The Moon, Alice!

In 2019 (back in the Before Time!) we told you about Moon Girl and Devil Dinosaur, a new 2D animated TV series based on the popular Marvel comic. Like many things during the pandemic, it’s gone through delays. But recently the folks at Disney have released the first trailer for the new series, along with news that it will be coming to television in 2022. “The highly anticipated 2D animated series follows the adventures of 13-year-old super-genius Lunella Lafayette and her 10-ton T-Rex, Devil Dinosaur. After Lunella accidentally brings Devil Dinosaur into present-day New York City via a time vortex, the duo work together to protect the city’s Lower East Side from danger.” See you next summer! 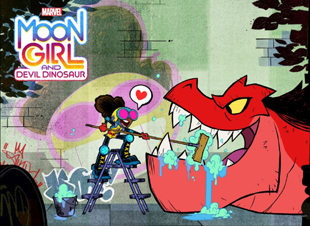