We’ve been hearing for a while now about a campaign by the original creators to rejuvenate the cult animated TV series Swat-Kats. Well now there’s this from Animation World Network: “The 1990’s cult classic animation Swat-Kats is set to make a comeback 28 years after the original series was produced. Show creators Christian and Yvon Tremblay have teamed up with Toonz Media Group to produce a brand-new series of the popular show featuring high-flying anthropomorphic feline fighters. The show is set in the fictional mega metropolis of Megakat City, where the two vigilante heroes fight off evil powers to keep their city from becoming a dystopian world.” Still no word on a release date, but this is a big step forward from the Kickstarter campaign. 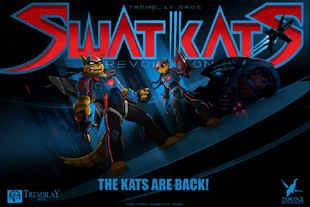