Looks as if people are still thinking up odd and interesting new takes on things… old and new. Try this on for size: “Perhaps one of the most memorable moments in Disney’s 1951 Alice in Wonderland was the Mad Hatter’s Mad Tea Party… It was certainly a deliciously humorous spectacle, so it’s no surprise Disney Television Animation has decided to create a heritage project where Alice’s great-granddaughter – also named Alice – has her own Wonderland bakery. ‘I started thinking about all the whimsy, the comedy, and the peculiar characters that are in the original movie and thought, wow, preschoolers are going to love this,’ remembers Emmy Award-winning writer Chelsea Beyl, creator and executive producer of the all-new series, Alice’s Wonderland Bakery… The series follows a new generation Alice (Libby Rue) as she wields her whisk in Wonderland to create wild cakes, muffins, and more in her enchanted, teapot-shaped bakery. Each 3D-animated episode is comprised of two 11-minute stories where Alice uses her baking skills to solve problems and bring people together in Wonderland.” The article at Animation World Network has a lot more, and the series has already premiered on Disney Channel and Disney Junior. 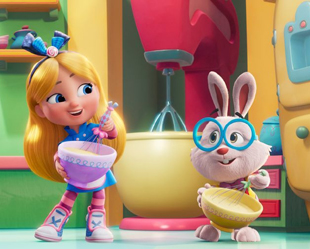