It May Require Super-Genius

Warner Brothers can often be relied upon for strange combination ideas with the properties. So check this out: “From Suicide Squad to Looney Tune Land, John Cena continues to expand his working relationship with Warner Bros., inking a deal to star in Coyote vs. Acme — a new live-action / CG animation hybrid feature that follows the misadventures of classic cartoon character Wile E. Coyote. Based on Ian Frazier’s 1990 humor article “Coyote v. Acme,” the movie is scripted by Samy Burch, and will be directed by Teenage Mutant Ninja Turtles: Out of the Shadows helmer Dave Green. Mixing courtroom procedural and zany comedic elements, the story is centered on a down-and-out billboard lawyer who decides to represent Wile. E. Coyote in his lawsuit against ACME Corporation over its defective products. Cena will play the lawyer’s former boss, who defends ACME in the case. The film is set to go before cameras in New Mexico in late March.” What’s more, the film is set to be produced by the ever-busy James Gunn. No word on a release date yet, but we’ll be watching. 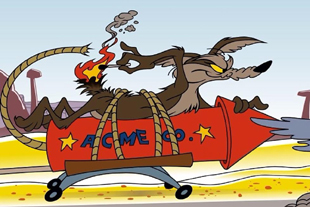