To Boldly Go Where No Cat Has Gone Before

Looks like we’ve been missing out on the really important parts of Star Trek: Discovery! To wit… “Sharper than a claw and more stunning than a phaser blast, The Book of Grudge’s Prime Directive features her take on everything from space travel to the proper care and training of an array of alien species, Star Trek-inspired quotes, and haiku meditations on Grudge’s most favorite things, including napping and people (as long as they’re far enough away). Make no mistake, Cleveland Booker’s massive – and massively cool – cat, Grudge is no mundane mouser. This taciturn tabby is, in fact, ‘a Queen’. She knows it, and everyone aboard the Discovery knows it, too… though some realize it just a bit too late!” Star Trek Discovery: The Book of Grudge by Robb Pearlman is available now in hardcover from Penguin Random House. 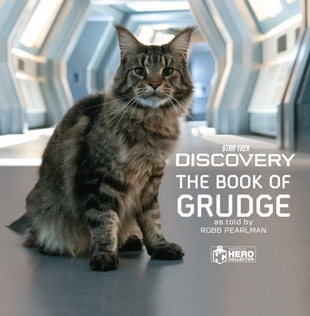