There is Puppetry in my Neighborhood

We had not heard about this, but we should probably mention it now! Animation World Network just reported that PBS Kids has secured some really big grants to help fund new TV series created by Fred Rogers Productions (named after the late great creator of Mr. Rogers’ Neighborhood, of course). And at least one of those series is of note to furry fans: “Inspired by the funny, quirky side of children’s television pioneer Fred Rogers, Donkey Hodie is an imaginative puppet series following the adventures of Donkey Hodie, an enthusiastic and charming go-getter who takes on each day with curiosity and resilience, and her pals Purple Panda, Duck Duck, and Bob Dog. Set in the whimsical land of Someplace Else, the social-emotional series is designed to empower children ages 3-5 to dream big and overcome obstacles in their own lives, to work hard and persevere in the face of failure, to be resourceful and discover they can solve problems on their own — and to laugh themselves silly along the way.” 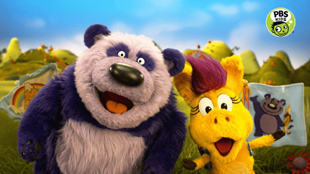