Dogs and Cats Reading Together

Scout Comics have an imprint called the Launch Series, which is designed for the youngest of beginning readers. To quote them, “Launch bridges the gap between children’s picture books and comics”. Following a long-honored tradition, of course the effort involves funny animals — chief among them, dogs and cats. First up are the adventures of Bandit the Boston Terrier, in a series of softcover books written by Amy Harlow and illustrated by Jim Mehsling. “Bandit is a spunky Boston Terrier with a wild imagination. Bandit’s best friend, Daisy, is a jolly and somewhat lazy Boston Terrier. Follow their adventures as Bandit confronts his household nemesis, the vacuum cleaner.” Then there’s the Supercats series, written by Caleb Thusat and illustrated by Angela Oddling. “In this origin story we see the young Mewow, destined to become a supercat, in her first adventure she taps into the hero within to save innocents in trouble… because Supercats will always save the day!” Both series have several titles. 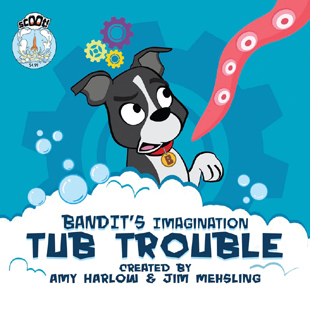