Jack is Back in Black — and White

Animation World Network let us know: Dreamworks Animation have announced a new upcoming CGI animated TV series, Kung Fu Panda: The Dragon Knight. And wouldn’t you know it, this new series features the return of none other than Jack Black as the voice of Po the panda. He’s been chatting about it on his socials. Here’s what Dreamworks says: “In the new series, when a mysterious pair of weasels set their sights on a collection of four powerful weapons, Po must leave his home to embark on a globe-trotting quest for redemption and justice that finds him partnered up with a no-nonsense English knight named Wandering Blade. Together, these two mismatched warriors set out on an epic adventure to find the magical weapons first and save the world from destruction — and they may even learn a thing or two from each other along the way.” No word yet from Dreamworks on a release date, but stay tooned. 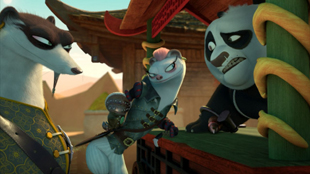