Word came out recently from Animation World Network that even more animation based on the stories of Dr. Seuss are in the works. “Netflix and Dr. Seuss Enterprises are teaming up to bring some of the most iconic and beloved stories and characters of the Dr. Seuss world to life with five new animated preschool series and specials. The projects are inspired by stories like Horton Hears a Who!; The Sneetches; One Fish, Two Fish, Red Fish, Blue Fish; and Wacky Wednesday; [along with] characters like Thidwick the Big-Hearted Moose. Executive producer Dustin Ferrer (Esme & Roy, Shimmer & Shine, Daniel Tiger’s Neighborhood) will serve as showrunner across all five, with additional showrunners revealed in the coming weeks. The announcement expands the partnership between Netflix and Dr. Seuss Enterprises following the launch of the critically acclaimed animated series Green Eggs and Ham in 2019, which will have its anticipated second season premiere April 8, 2022.” The various shows are a mixed bag of 2D and 3D animation. The article has more details! 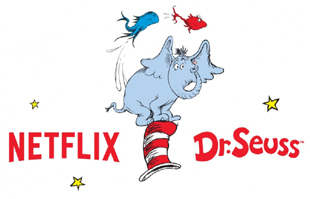