Do We Finally Get The Bunny?

For a long time, we’ve been talking about an animated TV series based on the award-winning comic series Usagi Yojimbo. For years. Nay, for decades! Well now, according to Netflix, it’s about to become a reality — and soon! “First announced in July 2020, the adaptation of Stan Sakai’s Usagi Yojimbo is coming to Netflix in April 2022 — specifically on April 28th, 2022… Candie Langdale and Doug Langdale are serving as the showrunners for the series. They’re best known for their work on Netflix’s Maya and the Three, [as well as] working on DreamWorks projects Puss in Boots and Kung Fu Panda: Legends of Awesomeness.” Now as to the plot: “Usagi is a young rabbit who doesn’t want much from life – just to be history’s greatest Samurai. When he comes to the futuristic city of Neo Edo to seek his destiny, he accidentally unleashes dozens of the bizarre, ancient monsters known as Yokai. Now, along with his new friends Chizu, Gen, and Kitsune, he must clean up the mess he’s made.” Stan Sakai himself is proudly involved with every step of the production. 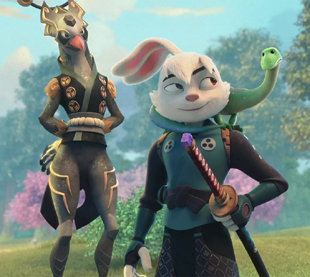