Another Web Is Woven

A post on Twitter guided us to this interesting news from Deadline: “Luke Matheny, who writes on, directs, and exec produces Apple TV+’s Ghostwriter, has signed up to serve as head writer and exec producer on HBO Max’s remake of Charlotte’s Web. The animated mini-series, which comes from Sesame Workshop, is set to start production next month and will air on HBO Max and Cartoon Network in 2024.” In case you need a reminder: “Charlotte’s Web tells the story of a livestock pig named Wilbur and his friendship with a barn spider named Charlotte. When Wilbur’s life is in danger, Charlotte weaves messages in her web praising Wilbur in order to drum up public support and persuade the farmer to let him live. The adaptation is the latest remake of E.B. White’s classic; an animated feature was produced by Hanna-Barbera in 1973, and Nickelodeon and Paramount rebooted it again when Dakota Fanning and Julia Roberts teamed up for a 2006 movie.” So is this new version 2D or 3D? 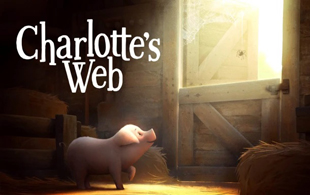