A Mind is a Terrible Thing

Seems like this has been out for a while, but it passed beneath our radar: Slow City Blues from Image Comics. “The story is focused on Detective John Loris, who gets trapped inside his imagination after accidentally killing a little girl in the line of duty. After trying to take his own life, John instead ends up in Slow City, a construct of his mind’s eye, a place where anything and everything is possible, except a way out… John Loris is both revered and reviled as The Creator, but in Slow City, even God is just another slob. So, he does the only thing he knows how: Be a cop. But times are changing and the wheels in his mind are in motion. And now, John and his partner, a six foot six, smart-ass skunk, must solve a double homicide and bring the killer to justice before a gang war between the Gorillas of the Devil’s Backbone and the Dragons of the Midnight Syndicate destroy Slow City.” To find out more, check out the Image press release. 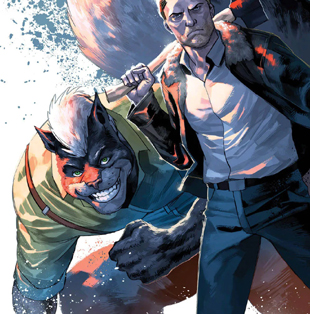