And He Sings, Too

You may have heard about the upcoming movie adaptation of Bernard Waber‘s bestselling and beloved book Lyle, Lyle, Crocodile. Well now Sony Pictures has dropped the first teaser trailer for the film, directed by Josh Gordon and Will Speck (both of whom recently worked on Hit Monkey). Turns out that star Javier Bardem does not voice Lyle, the crocodile from New York — that honor goes to singer Shawn Mendes. Bardem instead plays the impresario who is trying to make Lyle into a star — if the big reptile can avoid New York Animal Control, that is. Lyle, Lyle comes to theaters this October. 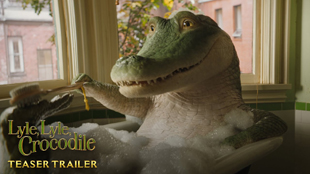