Didn’t hear about this coming, but here it is: “Disney Channel has dropped the official trailer for its upcoming 2D animated sibling superhero comedy Hamster & Gretel. From Disney Branded Television and produced by Disney Television Animation, the series introduces Kevin and his younger sister Gretel, who are prepped and readied to become a superhero sibling duo. In the show, the super siblings are about to receive superpowers from space aliens. But alas, things do not go as planned, and Gretel’s pet hamster, who happens to be named ‘Hamster,’ suddenly has new abilities. So now Kevin must figure out how to work with Gretel and Hamster to protect their city from mysterious dangers.” Check out the trailer at Animation World Network. It hits the air (ha ha) on August 12th. 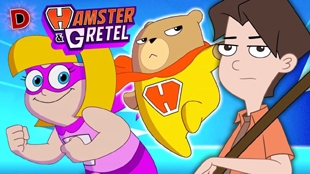