Monsters of the Deep… or Not?

For a while we had been hearing about the film The Sea Beast, but we didn’t know much about it other than it has a little girl and a big monster. Turns out that this animated feature is the latest work of writer and director Chris Williams, who previously gave us Moana and Big Hero 6 for Disney. Now with the help of Sony Imageworks he has brought this new film to Netflix, and the results are quite an eyeful! In a world much like our own but different, sailing ships and sailing crews travel the seas to hunt and destroy giant ship-crunching monsters… that is, until one day when an eager young girl stows away on the greatest monster-hunter ship, and things begin to rapidly change. The film is quite notable for the ethnic and sexual diversity of its animated cast. But of course, what furry fans are here to see are the kaiju-like sea monsters, and they do not disappoint. In fact, the young girl (and soon others) quickly learn that the giant monsters humans have been fighting may be far more than they appear to be… Check this one out. It’s currently streaming. 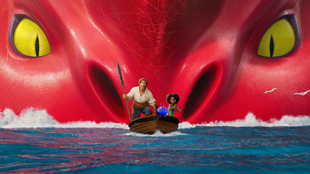