Speaking of bunnies… Quite a while ago (in the pre-COVID Before Times even) we told you about a Kickstarter campaign to bring back one of the original role-playing games, Bunnies & Burrows. Well now it finally looks as if that goal is coming to fruition: “Frog God Games has partnered with Dr. B. Dennis Sustare and Dr. Scott R. Robinson to return a venerable and influential piece of tabletop role-playing games to print… Bunnies & Burrows (B&B) is a role-playing game (RPG) that features animal characters contending with enemies and hazards in a world of nature. Published by Fantasy Games Unlimited in 1976, the game centered on intelligent rabbits. It introduced several innovations to role-playing game design, being the very first game to allow players to have non-humanoid roles, and the first to have detailed martial arts and skill systems. FGU published a second edition of the game in 1982, and the game was modified and republished by Steve Jackson Games as an official GURPS supplement in 1992. As rabbits, player characters are faced with dangers mirroring those in the real world. The only true ‘monsters’ in the game are humans, but there are many predators, traps, and natural hazards. The characters’ position in the food chain promotes an emphasis on role-playing and problem solving over combat.” Frog God has lots more information — and supplements too! 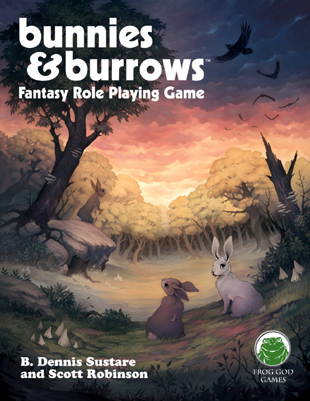