Adventures in the Great… Hotel Chain?

Well this is certainly something different… You may be aware that Great Wolf Lodges, the furry-leaning chain of hotel resorts and indoor water parks, have a collection of mascot animal characters that are an integral part of the experience when you stay there. Well now Great Wolf Resorts, the parent company of the Lodges, have commissioned an animation company to create a feature film of those characters — a film they intend to show at the Lodges themselves later this year. From Animation World Network: “Helmed by animation director Chris Bailey, the film debuts on September 3 in all 19 Great Wolf Lodge resort locations across North America. It will also be available on Great Wolf Entertainment’s new YouTube channel for a limited time… The movie tells the story of five unlikely woodland friends who form an unbreakable Pack while venturing out on adventures to help others in need. Starring the resort’s signature characters, Wiley Wolf, Violet Wolf, Oliver Raccoon, Sammy Squirrel, and Brinley Bear, the furry friends have been updated with a new hand-drawn look and angular style for their big screen debut.” Check out the trailer as well. 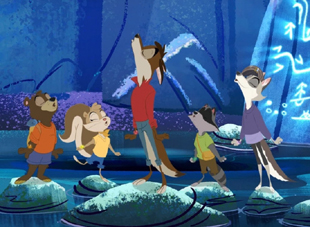