Seems we’re never far away from more anthropomorphic vehicles. Got this from Animation World Network: “Disney Branded Television’s new musical animated comedy-adventure series, Firebuds, follows a team of young first responders who embark on adventures with their talking sidekick vehicles to help their community and learn what it truly means to be a hero… Set in a world where talking vehicles live, work, and play with the humans who drive them, Firebuds follows a boy named Bo and his fire engine best friend Flash as they team up with their first responder friends to help others in their community with problems, big and small.” Various episodes feature musical performances by the likes of Weird Al Yankovic, Lisa Loeb, and Patton Oswalt. Coming this fall to Disney Channel, Disney Junior, and various Disney streams on September 21st. 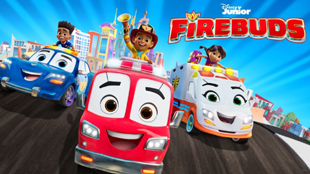