Where Do Unicorns Go?

The description of The World of Yaxin: Day of the Unicorn sounds so simple… “On an island between dream and reality, a young faun named Gabriel is fascinated by the extraordinary new creatures called unicorns. ‘A magical thing born of nature,’ he muses… What mystery surrounds their birth? What place, what function do these mythical animals occupy in this imaginary world?” This hardly scratches the surface of how respected and sought-after this largely wordless book of illustration has become. Now, it’s finally released in North America thanks to Magnetic Press. Creator Manuel Arenas is well-known as an artist for Disney Animation, having worked on films like Zootopia and Big Hero 6. 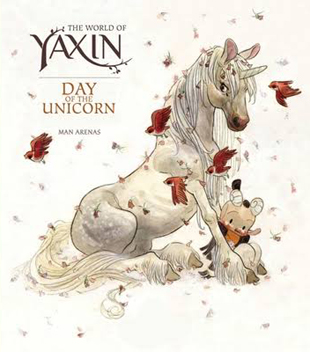