Female Flame-Breathers to the Fore

The Sparkle Dragons is a new full-color graphic novel written by Emma Carlson Berne and illustrated by Luke Flowers. “Meet the Sparkle Dragons: The spunkiest crew in all of Princess Puff’s queendom! Trixie is fierce with brains and beauty. Rue is tough as nails with a heart of shimmering gold. And, last but not least, Glinda, who often has her head in the clouds, but her out-of-the-box problem-solving can be her strongest asset. With their unique powers combined, they are an unstoppable force! And let’s be honest: Fighting off bad guys with glitter beams can be pretty hilarious . . . and sticky!” Do tell. It’s available now in hardcover or trade paperback from Harper-Collins. 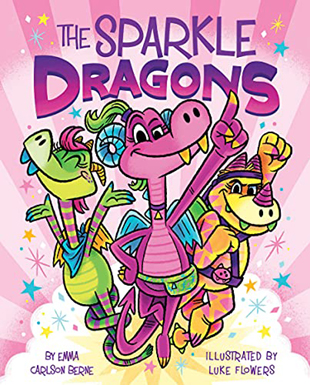