Hang Out With Your Loser Friends

Night in the Woods is a 2D video game created by Alec Holowka and Scott Benson. It’s… different, to say the least. And it involves a lot of funny animal characters. “All Mae wants to do is run around with her friends, break stuff and hang on to a life of aggressive aimlessness. She dropped out of college and returned home to her crumbling old mining town to do just that, but she’s finding that nothing is the same anymore. The old town seems different. Her old friends have grown in their own directions. Mae herself is undergoing some sudden and unexplained changes, giving her mysterious abilities that grant her access to a side of town she never knew existed. The world is changing, things are ending, and the future is uncertain. Up behind the park at the edge of town, back in the trees by the old mine- there’s something in the woods. And it could mean no future at all.” The game creators have had a very successful Kickstarter campaign; already they’ve earned pledges way beyond what they were asking for and they still have nearly a month left, as of this writing. Check out the Kickstarter page to see a video preview of the game as well. 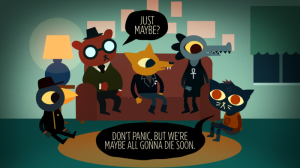