Monsters Make All The Best Stuff

From the Booklist write-up on Amazon, here’s a quick introduction to The Creature Department by Robert Paul Weston: “Elliot is overjoyed the morning his uncle, professor Archie Von Doppler, invites him to tour the supersecret invention lab at DENKi-3000, a company famous for its unusual, logic-defying products. But the secrets are more super than Elliot had hoped. The professor’s lab is staffed entirely by fantastical creatures—a French-speaking, bird-size fairy-bat; a giant dreadlocked salamander; and a librarian with three dragon heads atop octopus legs; etc.—whose otherworldly technology gives DENKi-3000’s inventions their astonishing appeal.” But all is not well, of course, and Elliot soon finds himself charged with protecting his new monster friends and their invention lab from an evil corporate takeover. It’s all in this new illustrated book published by Razorbill. It even has its own web site, complete with monster animation. 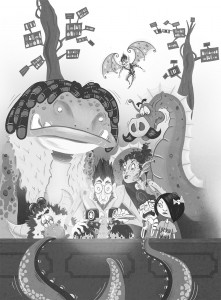