“On an alternate Earth, a griffin officer searches for his missing daughter, and uncovers a secret so terrible it could end his world.” That’s the author’s basic description of Griffin Ranger, a new fantasy novel project by writer and artist Roz Gibson (creator of Jack Salem). She further goes on to describe it this way: “Griffins, parrots, anthro wolves and little raccoon/lemur creatures! Lots of action and fighting! A bird-of-paradise griffin who hates getting his feathers mussed, but they end up very mussed by the end of the book!” There’s a Kickstarter campaign now to finance completing and publishing the project. The book will feature illustrations by Roz Gibson and a cover by Wolf-Nymph. 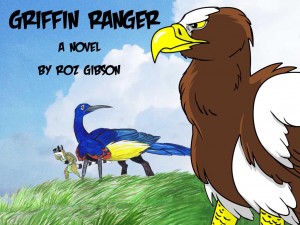