Chris Callahan is a writer and artists who has worked for several years in the animation industry. Evidently, he has something to say about it… Check out his new comic book creation, Robochuck: “With the introduction of computer-generated characters, the World Of Entertainment”s population is now sharply divided between two types of cartoon characters: the Flats and the CGs. In Flattown, Robochuck is the only CG character most of his neighbors know.  He dreams of restoring his city to its glory days, when flat toons like his adoptive father, Inksplat MaGee, were the world’s biggest stars. However, one person in the World of Entertainment will do anything to keep that from happening.  As Chairman of Piczar, Don Masshurter developed the computer technology that changed the landscape of animated entertainment, and he will stop at nothing to protect his new reign…” Nope, no reflection on the real world here at all, nope. So go ahead, check out the Robochuck web site. We won’t tell anyone! 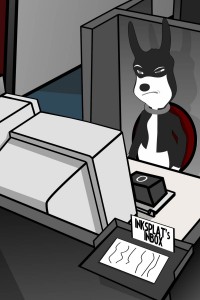