Usagi on the Big Screen?

At this year’s San Diego Comic Con there was a 30 year celebration of Usagi Yojimbo — created by Stan Sakai, of course. One of the items featured during the event was a screening of Usagi Yojimbo: The Last Request, an animated short film created by Lintika Films (using both 2D and stop motion techniques) and directed by Roel Robles. The big news is that Mr. Sakai was impressed enough with the project that he has allowed the studio to use Last Request as a proof-of-concept film for a possible Usagi feature. Now they’re out seeking funds to work on that project. Over at Cartoon Brew they have an article about the project that also includes a link to the short. 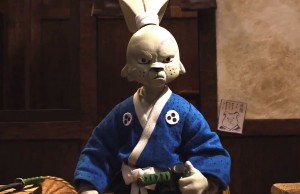