From Panda to Paired Up

John Stevenson co-directed the first Kung Fu Panda movie (along with Mark Osborne), and for that he received an Annie Award and an Oscar nomination. Now a relatively small film company, Unified Pictures, has hired Mr. Stevenson to direct their first foray into CGI animation: A feature film inspired by the story of Noah’s ark. According to an article in Variety, “The animated comedy adventure tells the story from the point of view of the animals and follows an outcast aardvark who becomes the reluctant leader of a ragtag group of misfit animals”. (Hmm, have these folks heard of El Arca?) The as-yet-unnamed film is being written by Philip LaZebnik (Disney’s Mulan and Pocahontas) and Glen Dolman (a writer of several TV series). It’s currently slated for completion in 2016. 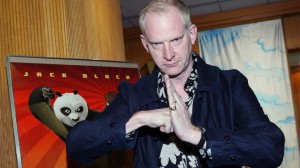