All the Worlds and a Rabbit

The big-name comic book publishers like to do things big. Really big: Whole universes have been made and destroyed on a regular basis. Now DC Comics is on the move again with The Multiversity, a new full-color series that tells of  a massive threat to all 52 of the known universes in the DC world. Created by superstar comics writer Grant Morrison (Animal Man and so much more…), the story goes like this: “The Multiversity is more than just a multi-part comic-book series. It’s a cosmos spanning, soul-shaking experience that puts YOU on the frontline in the Battle for All Creation against the demonic destroyers known as the Gentry!  In issue #1, pencilled by superstar artist Ivan Reis (Aquaman, Justice League), President Superman of Earth-23 uncovers a threat to all Reality so apocalyptic it will take a team of incredible heroes from across the Multiverse to face it – including Captain Carrot, like you’ve never seen him before!” Oh really now? Over at The Escapist they have a more complete review of the series. 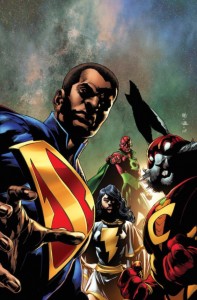