Just What Every 4th Grader Needs

Comic strip creator Dana Simpson (best known for the Ursa Major Award-winning Ozy & Millie) has a new on-line black & white comic, Heavenly Nostrils. (It’s up and running on Go Comics.) One day a little girl named Phoebe is out skipping stones on a pond — and she accidentally bonks a unicorn on the nose. By freeing that unicorn, Marigold Heavenly Nostrils, from her reflection-induced staring spell Phoebe is granted one wish… and she wishes for herself and Marigold to be best friends. From there, things get complicated. Well now Andrews McMeel Publishing have released the first paperback collection of Heavenly Nostrils strips, appropriately enough entitled Phoebe and Her Unicorn. Check it out at Barnes & Noble. 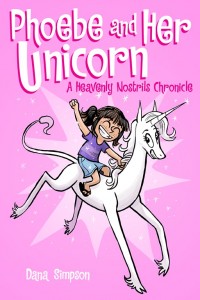