The Girl and Her Wolf Ride Again

If you haven’t already, you might want to make yourself familiar with Fairy Quest by Paul Jenkins (story) and Humberto Ramos (art). After selling out of their original trade paperback, Fairy Quest: Outlaws, Jenkins and Ramos ran a successful Kickstarter campaign to continue the story. And now Boom! Studios have picked up that continuation as a new full-color series, Fairy Quest: Outcasts. In the magical land of Fablewood, all the myths and legends of old must live their lives by the dictates of their Story — else the evil Think Police will wipe their minds clean. Now, Red Riding Hood and Wolf have broken the law — by becoming good friends. The first issue of Outcasts will hit the shelves this October. Check it out at Previews. 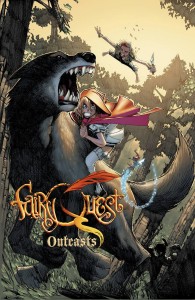