Italy appears to be the latest country vying to jump into the international animation pool — and it’s doing so with animated animals. According to an article in Variety, Ambi Pictures (currently producing a live-action film with Al Pacino called The Humbling) have announced their first animated feature, Arctic Justice Thunder Squad, directed by Matthew Lyon and animated in his native Canada. “The tale turns on a sinister walrus who plots to accelerate global warming and melt the Arctic Circle. A rag-tag group of inexperienced heroes, led by a fox, must come together to foil his nefarious plan and save the Arctic.” The producers, Andrea Iervolino and Monika Bacardi, are currently in America looking to secure funding and distribution for the film. So far, no word on a possible completion date for it. 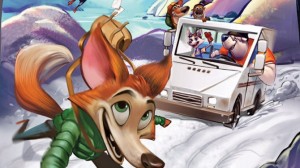