She’s The Sheriff. He’s An Alien.

The folks at Image Comics bring us a new full-color science fiction/western mash-up with Copperhead, written by Jay Faerber and illustrated by Scott Godlewski and Ron Riley. Clara Bronson is human, a single mother, and the newest sheriff of Copperhead, a dusty mining town on a backwater planet inhabited by humans and aliens. Among them Clara’s tall and furry head deputy — who rather resents his new boss, for several reasons. Things get complicated quickly, needless to say. Read about it over at the Image Comics web page, and look for Copperhead in stores later this month. 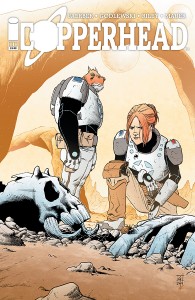