Disney/Pixar have launched their new Studio Artist Showcase series with Over There, a full-color hardcover book for young readers written and illustrated by Steve Pilcher. “Shredder is a little shrew who lives by himself, and while he loves his forest home, he gets a bit lonely. There must be something more, he thinks. So when he sees a ‘silver line twinkling in the distance,’ he decides to find out what it is. He discovers a beautiful stream, but then he gets caught up in the current! Luckily, a mole named Nosey saves him. As they explore, Shredder begins to miss the forest, so he and Nosey return together, and Shredder realizes that all he really needed was a friend.” Over There is available later this month, and it’s been reviewed over at Publishers Weekly. 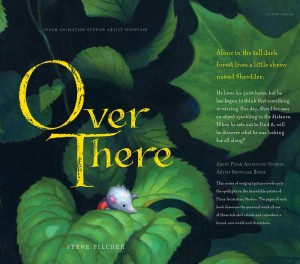