Walt Disney referred to Marc Davis as his “Renaissance Man” because Marc could seemingly do anything… He could do storyboards, design characters, animate, and he could even help to design new attractions for Walt’s theme parks. And now professionals from each of those departments and more have gathered together to celebrate Marc’s life and legacy in a massive new hardcover book, Marc Davis: Walt Disney’s Renaissance Man, coming this October from Disney Editions.  It’s filled with Marc’s original sketches and designs, as well as background information from his friends and co-workers. Need a furry tie-in for all this? Look no further than his character designs for The Country Bears and America Sings attractions at Disneyland. But there’s more. 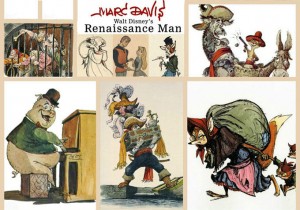