Becky Dreistadt (Adventure Time 2014 Annual) and Frank Gibson (The Amazing World of Gumball) are well-known in the on-line art community for a collaborative art project called Tiny Kitten Teeth. Well now their newest collaboration is being released in full color by Boom! Studios: Capture Creatures. “Over a hundred wonderful and terrifying creatures have suddenly appeared on earth. Two teens investigate the origins of these curious creatures and how they can stop those who are trying to destroy them.” If you want to find out more, Becky and Frank have an official Capture Creatures web page, while Comics Alliance have a preview of the first issue with cover variations by guest artists. 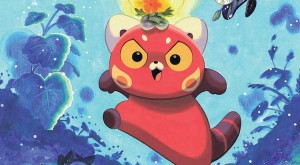